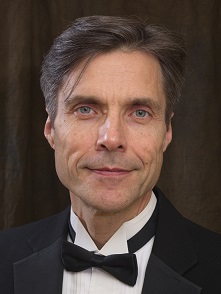 Forrest Kinney is an educator who has taught music for four decades. He is a Nationally Certified Teacher of Music (NCTM) as recognized by the Music Teachers National Association (MTNA). His goal is to help others become creative, whole musicians capable of enjoying the Four Arts of Music: improvising, arranging, composing, and interpreting.

Forrest is frequently a presenter at conferences and public events. He has given hundreds of presentations (speeches, workshops, master classes, concerts, teaching demonstrations, etc.) for music educators in the U.S., Canada, and Europe. He has been the Conference Clinician, Conference Artist, or Guest Artist at eighteen state and national music teacher conferences. This includes six straight years (2012-2017) as a Guest Artist at the Music Teachers Association of California conference. In 2015, he gave five presentations at the National Conference on Keyboard Pedagogy, including a Teaching Demonstration of the Four Arts. Though he usually speaks about the Four Arts, his topics have included performance anxiety, piano technique, songwriting, the history of music, and creative practicing.

Forrest is a pianist and performer. He has given many solo and collaborative concerts in the past few decades, many with vocalist Kevin Helppie, his collaborator on the World Songs project, and Andrea Rackl, his duet partner. At his engagements, he often begins by spontaneously composing pieces for audience members based on notes or themes given him. He also frequently improvises with audience members, some who have never played the piano before. Forrest played for the 26th time at the home of Bill and Melinda Gates in December, 2017. He has also performed at many events hosted by the Seattle Symphony.

Forrest is a professional arranger. His arrangements for the piano and a variety of instruments are included in over 40 publications by the Royal Conservatory of Music.

He is a composer who has composed hundreds of piano pieces and songs. He is the co-composer with Dr. Kevin Helppie of World Songs, two collections of 35 original art songs based on ancient poetry from around the world, Drops of Silver, a song cycle, and Bridges to Artistry, a collection of 26 songs that are etudes.

Forrest was awarded a U.S. Patent for inventing a new kind of computer key system that allows us to type all the letters of a word at once, just like playing chords on a piano.

Forrest lives amongst mossy trees in the mountains east of Seattle, generally preferring what he calls “a 19th-century lifestyle.” He is immensely grateful to be able to make his living by creating music and books, and by sharing his belief that creativity is a key to happiness.

An introductory Pattern Play series that introduces the materials of music (scales, intervals, and chords) in creative and musical ways.... Read >>