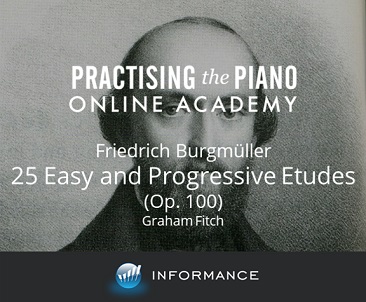 Save with a subscription!

Friedrich Burgmüller (1806 – 1874) was a German pianist and composer who moved to Paris at the age of 26 and settled there. In addition to light salon music, he wrote three sets of études for young pianists.

Burgmüller’s 25 Easy and Progressive Études, Op. 100 have been a mainstay of elementary étude repertoire for many generations - and deservedly so. Like all great études, the study of technique merges with attention to quality of sound and a musical purpose. The musical content of these pieces is on a level with the technical challenges they pose, so that the listener would not necessary realise they have any didactic focus whatsoever. Because each has its own descriptive title, the études inspire imagination and characterisation in the player, elevating the works to the status of real music (as opposed to the dry and boring studies that are so often the diet of pianists). I cannot imagine any young pianist or elementary player who would not immediately engage with this charming set of études, or benefit from learning them.

As the title suggests the études are progressive in their difficulty, ranging from approximately ABRSM grade II at the start to approximately grade V by the end. A good plan with études in general is to learn them, master them and continue to play them on a regular basis (much as you would do with any form of physical exercise). As you go along, you will amass a repertoire of études you can draw on as part of your daily practice. It is a good plan to choose three or four to practise for a week or so, and then move to others so you don’t get bored.